A few of my students have thought they were were playing altissimo on saxophone, when that wasn’t really the case.

Notes that use the palm keys are fairly high and may be difficult to play, especially for beginning sax players, but that doesn’t make them ‘altissimo’.

At some point after you have been playing saxophone for a little while, you may hear this word, ‘altissimo’. Maybe it’s thrown into a conversation you hear, something like, “Man, then the sax player hit that altissimo C and it wailed”.

Pretty soon, you start to get the idea that it has to do with high notes.

But how does it work?

Where does it start?

Basically, saxophone altissimo starts above high F#. Some might say that this F# is the first note of altissimo.

D and Eb use palm keys, but are not altissimo.

The G above that F# is altissimo, as are notes above that.

Depending on your control and skill, you can go up another octave, or two, or more……

These options seem to work better on alto or tenor and even between brands of saxophone.

You often want to try many fingerings to see which come out the most easily and which are the most in tune.

You may modify the fingerings slightly. Things like putting down the bis key to make it a little lower, etc.

Without the foundations though, trying the different fingerings can be fairly useless.

The foundations include a developed ear to ‘hear’ the notes before you play them and a good working ability with the harmonics.

Most important thing ever to learn on saxophone?

They sound cool in solos, occasionally come up in parts, and working on being able to play them will strengthen your overall tone.

At what point should you work on them?

When it makes sense, so after you have a good sense of rhythm, have a decent tone, know some scales, etc. Probably after you have been playing for a few years and want to add something new to what you can play.

Got this question about saxophone altissimo the other day. Seems like something that you might be working on too.

Picture of the sky in Kirindiwela, Sri Lanka. Since you’re playing notes up there with altissimo. 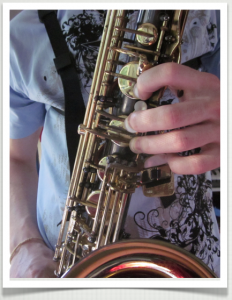 “How to get overtones?”

You can check out this video I made

There is more on overtones/altissimo in Saxophone Tribe.

Basically you start by getting the overtones using the three lowest notes on the saxophone- Bb, B, and C. The first one you want to use is Bb.

You can get overtones from other notes/fingerings, but it’s going to be easiest to start with the low Bb.

Spend a little time working on it everyday if this is something you want to develop. Consistency is very important.

At the same time, find a time and place that you won’t bother people since it won’t sound very musical at first.

I was wondering what the normal age a sax player should start integrating altissimo into their improv? I’m 15 and I can hit up to D pretty solidly. I use G-C in my improv most of the time, when it calls for notes that high. I’ve been playing for 5 years now and was wondering if I should be going higher? Thanks!
-Ed

My response:
It seems like he’s doing pretty well with altissimo on sax.

There is no ‘normal age’ for integrating altissimo into playing saxophone. Sax players start playing at different points in their life, with different levels of practice and discipline, and with different goals. I’m not sure if you’re planning on being a professional musician or what styles of music you play.

If you feel that you would like to go higher, spend some time on it. There are a million things to practice, you get to choose what you feel is important. There’s probably a point of diminishing returns on how hard you work at it to get higher. Is working on your altissimo making you a better musician than spending the time transcribing?

If you really feel your voice on saxophone is in a higher range…. you might actually want to just play some soprano sax. Coltrane played a lot of high stuff on tenor sax and then Miles Davis gave him a soprano and he sounded great on it. And it was easier to play up high.

Developing your abilities with playing the altissimo range on sax is great for your sound, if you can play altissimo that means you have a lot of control.

The steps leading up to altissimo, practicing overtones and the like are great for developing your sax playing.

So, if you have mastered the fundamentals of playing the saxophone, it’s a skill you can add to how you play.

Is altissimo itself a fundamental piece of playing saxophone? I would say not.

It’s probably more useful than double tonguing, which saxophone players were taught once upon a time as part of a standard saxophone education.

What do you think?

I used to think that saxophone altissimo was something people placed too much importance upon.

The altissimo notes themselves are cool, but aren’t a fundamental part of playing saxophone.

However, I was looking through Top Tones for the Saxophone last night and reading what Rascher said.

It is useful to extend the range of the saxophone.

But the main benefit is that if you can do altissimo, your sound will be better overall on the saxophone.

You’re working on control, overtones, a lot of elements that relate directly to your sound.

It will make every note sound better if you spend the time and develop your altissimo playing.

So I think I’ll spend some more time on it! 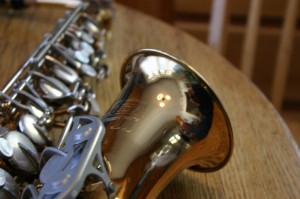 To play in the altissimo, you need to understand the physics of your instrument.”
– Lenny Pickett pg 16 (Saxophone Masterclasses)

Players like Lenny Pickett throw in a lot of altissimo range and most professional (non-classical) sax players will hold out that screaming high note at least occasionally.

Lenny Pickett has also written about it in several articles in a couple of other books.

It’s a matter of developing your throat and being able to ‘hear’ the note in your head that you want to play.

“It takes time to acquire, but you don’t want to sacrifice the rest of your instrument for the sake of the altissimo.”
-Lenny Pickett pg 17 (Saxophone Masterclasses)

Sigurd Rascher was a master of altissimo on saxophone. When you get to the point where you’re ready to tackle altissimo, the book Top Tones for the Saxophone can help you.

Players like Lenny Pickett throw in a lot of altissimo range and most professional sax players will hold out that screaming high note at least occasionally.

Another good book that compliments this Rascher classic, is Beginning Studies in the Altissimo Register by Rosemary Lang.

What I like about Lang’s book is that each set of 2 pages is dedicated to a particular note. This way a student can actually gauge their progression through the altissimo range better.

I personally like using the Lang book to work on specific notes that might be giving me problems. For example, if I want to work on my B3 or D#4, I use the exercises specifically dedicated to those notes. 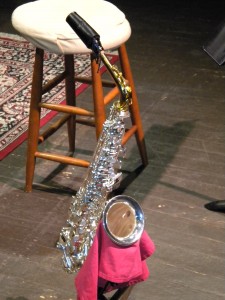 Neal: Can you play the harmonic series using the low Bb, B, and C fingerings? If so, how high can you go?

Courtney: Altissimo = a PAIN. I’ve had that same situation, a LOT of practice with those harmonics and your mouth shape.

Richard: I’m not sure how high I can go on B and C, but I can go to high Bb and almost the high F(I’ve done it two or three times, but can’t do it consistently).

Courtney: (I never did get to master it, it was too close to performance) but I just sat there and tried jumping between each harmonic, and then would start skipping every other one until I could play whichever one I wanted without having to start at the bottom. That high F and F sharp are a challenge to get consistently o.O

Richard: Is there a specific exercise you used that helped?

Courtney: I played around a lot with my mouth shape/tongue placement, yada. Took note of what worked best on my sax, I wasn’t really equipped though so whatever I did didn’t help all that much. Not sure exactly what to tell ya =/ you should talk to someone more experienced than I. xD

Richard: Thanks anyways. I was looking for like a worksheet or something with exercises in harmonics. I’ll ask my teacher when I see her next for something, but I was hoping somebody could suggest something in the mean time.

Neal: For now, just work on getting up to the second octave above the low note starting on Bb, B, and C.  Make it clean and spend a little time on it everyday.  The intervals are the same starting from those notes, I wrote it out for Bb here.

This is not the most musical of things to practice…. but a little every day not late at night shouldn’t make anyone too mad.  And you’ll improve it gradually.

A set of exercises can be found in the book Top-Tones.